So You Think You Can Sin?

Last night I went to visit with my sister, and once more try to lead her and her family out of the DARKNESS that is the Roman "church". There are times it seems like I can almost reach her, but I've almost given up HOPE for her monster of a daughter, my niece Brandi.
The SIN this child is drenched in seems to know NO BOUNDS, and yesterday was no different. Against my express orders, Brandi was watching SECULAR TELEVISION! What's the point in sending her video tapes of The 700 Club if she's not going to play them?
Now here's the thing about Fox. On the one hand, they have Fox News. Fair and balanced, it's the BEST source for UNBIASED information on TV and it represents everything that's good about America. Satan can't be having that, so he's worked to undermine Fox News by forcing Rupert Murdoch to create Fox Broadcasting, a decadent sewer of a network that brought us such horrors as The Simpsons, Family Guy, Melrose Place and American IDOLATRY.
The "entertainment" arm of of Fox has sunk to a new low. I caught Brandi watching a two hour homage to FORNICATION, SODOMY, and SLUTTINESS! She was watching an abomination called "So You Think You Can Dance?" 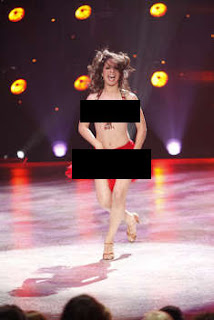 It was nothing but slatterns and sodomites rolling around on stage, groping each other and SIMULATING SEX in alleged "dances"! 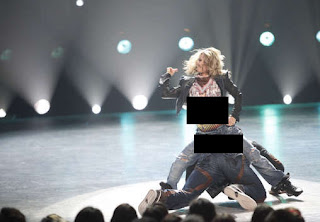 This show can be watched by ANYONE, yet the harlots on it dress like they belong in a STRIP JOINT in LAS VEGAS, not on FAMILIES' TELEVISIONS DURING PRIME TIME!

Young girls are watching this trash, and instead of learning how to be DECENT wives and mothers, the only lesson they are getting is on how to be a wanton floozy!

1 Timothy 2:9 In like manner also, that women adorn themselves in modest apparel, with shamefacedness and sobriety; not with braided hair, or gold, or pearls, or costly array

MODEST APPAREL! I've seen more modesty in a monkey cage at the zoo that I saw on this perverse broadcast!
The boys aren't getting off any easier. When they should be learning good, healthy SPORTS, they are instead watching sodomites prance about the stage. Why put in the HARD WORK needed to be an ATHLETE when all you need to do is CHOOSE TO BE A HOMOSEXUAL and you can get on NATIONAL TELEVISION! If it worked for the person who is trapped in the "gay" DEATHstyle pictured below, your son will likely think it'll work for him! 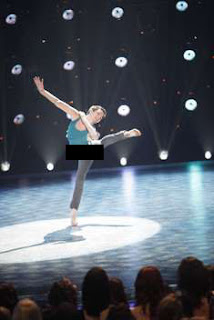 Nauseating, I know. When ACTIVIST JUDGES overturned the FCC's indecency policy, did they give ANY THOUGHT to the fact that it would result in something like THIS... 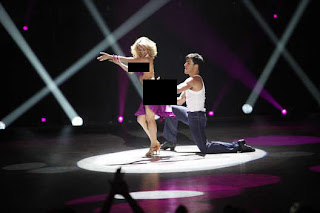 Exodus 32:19 And it came to pass, as soon as he came nigh unto the camp, that he saw the calf, and the dancing: and Moses' anger waxed hot, and he cast the tables out of his hands, and brake them beneath the mount.

I have to wonder what Moses is thinking if the LORD allows him to down from Heaven and see the world today.
When I was doing the necessary research for this post, I thought the mostly naked trollops and homosexuals were the worst of it. Little did I expect that they would be TELEVISING BLASPHEMY TOO! 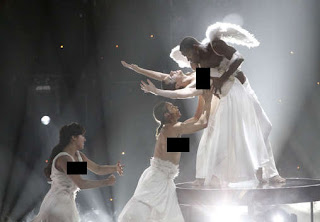 This leaves me just SPEECHLESS.

2 Samuel 12:14-18 Howbeit, because by this deed thou hast given great occasion to the enemies of the LORD to blaspheme, the child also that is born unto thee shall surely die.
And Nathan departed unto his house. And the LORD struck the child that Uriah's wife bare unto David, and it was very sick.
David therefore besought God for the child; and David fasted, and went in, and lay all night upon the earth.
And the elders of his house arose, and went to him, to raise him up from the earth: but he would not, neither did he eat bread with them.
And it came to pass on the seventh day, that the child died. And the servants of David feared to tell him that the child was dead: for they said, Behold, while the child was yet alive, we spake unto him, and he would not hearken unto our voice: how will he then vex himself, if we tell him that the child is dead?

God is NOT MOCKED. Prayer Warriors, you know what you have to do. Please join me in prayer that THE LORD RETURNS before the perverts who have foisted this on our children succeed in driving them away from SALVATION!

Galatians 5:19-21 Now the works of the flesh are manifest, which are these; Adultery, fornication, uncleanness, lasciviousness,
Idolatry, witchcraft, hatred, variance, emulations, wrath, strife, seditions, heresies,
Envyings, murders, drunkenness, revellings, and such like: of the which I tell you before, as I have also told you in time past, that they which do such things shall not inherit the kingdom of God.

After lecturing to Brandi for two hours and sharing with her my WITNESS of the LORD JESUS CHRIST, I hope she's learned an eternal life-saving lesson. If not, then at least she'll learn a lesson as she works to buy a new television to replace the one that felt my Bible fly through its screen. 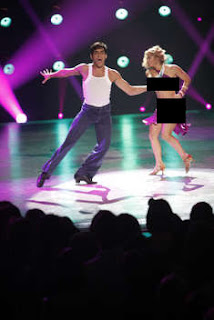 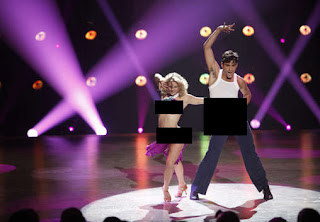 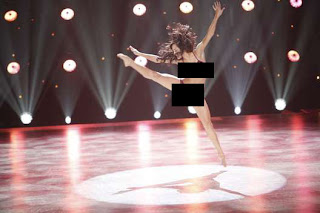 Ugh.
God bless, and I pray you won't get these terrible images stuck in your heads.
Posted by Mrs. Whitford at 8:23 PM

Email ThisBlogThis!Share to TwitterShare to FacebookShare to Pinterest
Labels: dancing, homosexual agenda, homosexuals, So You Think You Can Dance, television, trollops