Is Obama hiding a DARK secret?

It seems like we know know EVERYTHING there is about B. Hussein Obama, but I wonder if there is one more DEEP DARK SECRET left to uncover. Let's look at what UNASSAILABLE FACTS we already know about him.

He's NOT a natural-born AMERICAN citizen.

He HATES AMERICA and FREE ENTERPRISE.

Then there's this, the one that matters most for where I want to take you... He's a NAZI. 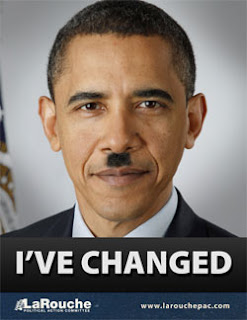 Scott Lively, president of Defend the Family, and Kevin Abrams had written a scholarly book that I just found out about called The Pink Swastika that BLOWS THE LID off one of the most SHOCKING things about Hitler's Germany - THE NAZIS WERE HOMOSEXUALS! I haven't read it yet, but if you follow the link in the name the authors have made this IMPORTANT WORK available online. I've absolutely NO DOUBT the PROOF IS INCONTROVERTIBLE!
If there is ONE THING conservative Christian Republicans have IN SPADES over LIEberals, DEMONcrats, and other America-hating intellectual ELITES, it's our ability to use ROCK SOLID LOGIC to see where the pieces of a puzzle FIT TOGETHER.

Using logic, let's look at the facts once again: B. HUSSEIN OBAMA IS A NAZI. THE NAZIS WERE HOMOSEXUALS.

Now I'm not saying B. HUSSEIN OBAMA IS A HOMOSEXUAL, but his anger at America makes even more sense if this is indeed the case! No wonder he wants to dismantle our military by repealing the fair and just Don't Ask Don't Tell policy that's in place for excellent reasons (though military brass should be free to ask, but we'll wait until after 2012 to get our next Republican president on that)!

It's up to us as citizens of this great nation to stand up and demand the facts! If THERE IS A HOMOSEXUAL IN THE OVAL OFFICE, we have a right to know!

Please everyone, join me in prayer and write to your senators and congressmen! DEMAND ANSWERS to this frightful possibility!

Thank you, and God bless.
Posted by Mrs. Whitford at 8:10 PM