"Iron Man" is an ATTACK ON GOD!

Friends, it has come to my attention that the LIEberal, God-hating, America LAST wackos in Hellyweird have done it again! Apparently there is a series of movies about something called an "Iron Man"! 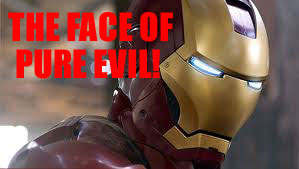 As we know, God is omnipotent...

Matthew 19:26 But Jesus beheld them, and said unto them, With men this is impossible; but with God all things are possible.

One of the absolute PROOFS of His omnipotence is His ability to create the only thing that can stand against Him - iron chariots!

(He can discomit them as per Judges 4:13-16, but He can't drive them out.)
Now why the Lord would create something He can't defeat, who knows? We can NOT presume to know His mind beyond what He has written in His Word, the Holy Bible. Perhaps it was to make things more exciting, the same way "Superman" has "Kryptonite".
However, this does give the enemies of God a weapon against Him. If He can't drive out iron chariots (by His own design), why not try making an IRON MAN!
This is SICKENING! While the Bible does specifically say iron chariots, and perhaps it's only iron made into the shape of a chariot that God designed to be the one thing He can't stop, it makes perfect sense for Satanists, witches, and atheists to try iron in other forms to see if God can't drive them out either!
Something needs to be done about this abominable attack on the Lord. Get on the phone and call your congressman! Write a letter to your senator! Hellyweird has gone TOO FAR and must be forced by law to stop this outrageous behavior!
Posted by Mrs. Whitford at 2:32 PM